The Third Annual Patchwork of Life Women’s Conference will be held in Palacios, TX on April 11, 2015. As part of the Conference’s Pottery Exhibit, oil lamps from three distinct periods of ancient history will be on display – the Intermediate Bronze Age (2000 BC), the Iron Age (1500 BC to 600 BC) and the Herodian Dynasty (50 BC to 50 AD). 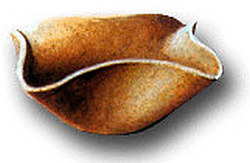 The Bronze Age lamps were used during the lifetime of the Biblical characters, Abraham and Sarah. The four-wick lamps were developed for a specific use and its use lasted for only a short period of time in history. One theory regarding the Bronze Age lamp development is that a major climatic catastrophe caused a massive decrease in the availability of olive oil, causing the societies to use fish oil to power their lamps instead. However fish oil burned less brightly than olive oil and hence the development of a four-wick lamp to compensate for the lower light output per wick.

The Iron Age lamp was in use during the lifetime of the Israel’s King David. It is also know as the Canaanite Olive Oil Lamp. It is among the earliest of clay lamps. In antiquity, it was developed after a saucer or shallow bowl had its edges folded up to form a spout. A great variety of these lamps exist because they were used for hundreds of years.

The Herodian Dynasty Lamp was common in Judea during the life and ministry of Jesus. It was in widespread use during the reign of Herod the Great in Israel. This lamp was wheel-made with the spout applied by hand. All the lamps are hand-made and are authentic reproductions, handcrafted in Israel and made of terracotta.

In addition, the Conference will feature 4000-year-old potsherd fragments from the Holy Land, discovered by the Smithsonian Institution in Washington, DC, as well as authentic American Indian pottery.

This year’s speaker, Rachel Norris, Master Potter, will be speaking on “The Potter’s Hand.” Rachel will be performing a live potter’s wheel demonstration as she illustrates her message. The Conference will be held at The Christian Life Center, 202 Welch St. Palacios, TX from 8:30 AM-3:00 PM. Lunch is included in the ticket price.

Tickets are available at Old Main Bookstore, 438 Main St, and First Baptist Church office, 202 Main St. in Palacios and Studio ZG, 1820 7th St. in Bay City, as well as on-line at www.patchworkoflife.com. Tickets are $15/ea. or two tickets for $25 and include lunch, program and exhibits. Free child care for 0-5 years old is available by pre-registration. Pottery Registration as well as a Child Care Registration is also available on-line.